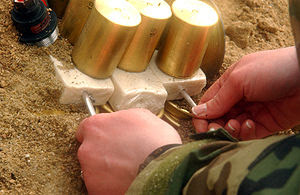 While on a recent mission our correspondent’s squad received a call from the Iraqi police that they had discovered a team of criminals burying an IED in the street. They disrupted the vile deed, and chased the perps. Meanwhile, guards were left to keep people away from the IED, and they asked for assistance to remove the explosive device. Our correspondent, having spent a year as a combat engineer and safely blown up many an IED and other ordnance, took a look at the thing and determined that pasting a little hunk of C4 plastique explosive and detonating it would eliminate it nicely. That is the safest thing to do with an unpredictable IED.

Unfortunately, not in the engineers anymore, our correspondent no longer carried hunks of C4 in his backpack. So, they called in demolition specialists who arrived with a full team and a robot. The robot carried and set the C4 on the IED. Everyone took cover, and it was safely blown up. Our correspondent’s squad members, not having been that close to a real explosion before were mightily impressed with the power. To our correspondent, it was kind of piddling, but he went along with the spirit of the moment and acted impressed too.

He made a mental note to contact higher ups about permission to carry a hunk of C4 in his backpack, for just such situations. Why bring in a whole squad with robots, and take up hours of so many people’s time? He could have taken care of the thing in five minutes. What efficiency!

Sensible as this is, he doubts the higher-ups will buy it. Not such a bad thing for his many friends who would have one less thing to worry about.

Purchase on e-bay for cheap domestic and international shipping.